You can quote me on it 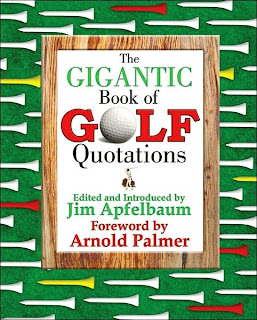 There is nothing better than getting a snippet of someone's thought...to me, they bring the same effect as a double-shot espresso: short..to-the-point...bound to give you a good kick in the brain.

Lately, my wife and I have been engrossed in the show 24. The main character Jack Bauer, always says "do it now". This expression usually helps him motivate people to save the world from its own destruction. We've taken a liking to that expression, and say it at least 100 times a day to our 4-year old, and find it to be very motivating. To quote Jack: "do it now" has a different usage for us, than say one of Jack's field agents.

That's just how good quotes are. They bring different meaning to different people.

Jim Apfelbaum agrees with me. In his new book The Gigantic Book of Golf Quotations, Mr Apfelbaum makes sure that there is a gold-nugget quote for each and every one of us. His tome, weighing in at 4lbs, is filled with more than 3,000 quotes, some classic, some freshly-minted. There is inspiration and hilarity in each of the 800 pages. Perhaps the most awe-inspiring is the Those Quoted section where readers can get a glimpse of the people who have offered-up these timeless quotes. It is a great resource, as well as a very fun read.

Excerpted from The Gigantic Book of Golf Quotations, edited and introduced by Jim Apfelbaum, with foreword by Arnold Palmer. Published in 2007 by Skyhorse Publishing, New York.

“Reverse every natural instinct and do the opposite of what you are inclined to do, and you will probably come very close to having a perfect golf swing.”
—Ben Hogan

“After taking the stance, it is too late to worry. The only thing to do then is to hit the ball.”
—Bobby Jones

“The number of shots taken by an opponent who is out of sight is equal to the square root of the sum of the number of curses heard plus the number of swishes.”
—Michael Green, pro on the European Tour

“This golf cart has opened the eyes of Americans to the need for more truly universal design that not only improves the lives of people with disabilities, but the lives of us all.”
—President George H.W. Bush

“You create your own luck by the way you play. There is no such luck as bad luck. Fate has nothing to do with success or failure, because that is a negative philosophy that indicts one’s confidence, and I’ll have no part of it.”
—Greg Norman

“My golf is woeful but I will never surrender.”
—Bing Crosby

“I have a tip that can take 5 strokes off anyone’s golf game. It’s called an eraser.”
—Arnold Palmer

“The only time my prayers are never answered is on the golf course.”
—Billy Graham

“I’ve studied golf for almost fifty years now and know a hell of a lot about nothing.”
—Gary Player

My wife got me that book and I use some of the quotes on my golf sites. This book is huge!

Love this book, and the quotes are so funny. Shame there are none about Galvin Green