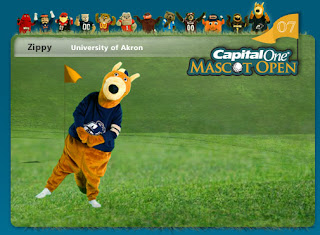 One of the more enduring commercial series is the annual 'Capital One Mascot Challenge' during bowl weekend. This year Zippy, the kangaroo mascot from my Alma Mater: The University of Akron, was one of the contestants in the Mascot Open.

Zippy is the modern shortened version for the school's original sports teams name The Zippers.

(I know what you're thinking...leave it to an Ohio school to come up with a name like that).

In the 1920's, the President of the college thought it to be a good idea to let the students come up with a name for the its athletic teams. Well, Akron Ohio was the rubber capital of the world at the time, and one of those rubber inventions: over-sized shoe covers...or galoshes, were very popular then. Well, if you've ever worn them you know how hard they are to put on...especially wet...

...unless you have zippers on them.

Yes, the zipper was the BIG invention of the day...literally blossoming new industries (and defeating old ones: putting tailors and button-makers out of business). Yes, the zipper, was huge, so that was the popular name of choice for the contest.

Thus The Zippers were born. Later it was shortened to Zips, and in 1953 the kangaroo was elected as official mascot. Zippy, as she (yes, only one of two mascots are female) is affectionately known, rambles around at all the various sports events in the University's portfolio.

Hey, for a town known for the birth place of Devo...we could have done a lot worse.

Thanks for reading, keep it in the short-grass,

I love this on going set of commercials.