Tiger Woods has met his match....but it isn't another golfer.

He's coming from across the Pond with the the swiftness of a free kick.

He's David Beckham, England's most famous footballer, and international celebrity. Coming to America by way of Real Madrid, signing a monster contract to play with the American team LA Galaxy. How much is monster? Well, with endorsements he might top out at $250 meelion. Tiger last year cleared less than half that.

But that's not where he's met his match.

In a survey conducted by HSBC, results of a new study on the effects of sports on successful childhood development.

“Successful Youth Development: The Contribution of Sport" researched adults aged 18+ from the United States, the United Kingdom, and China were asked what they felt the key values for optimum child development were. They then identified the sports and athletes they believed to be most effective at teaching these values.

Here are the findings for America and England: 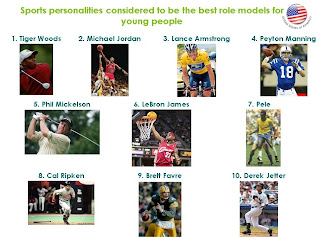 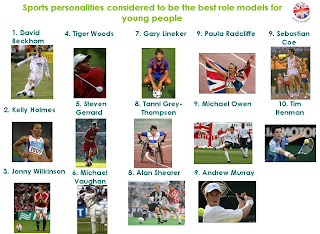 Tonight David Beckham will usher in a new era for American sports as he takes the field in LA Galaxy's first match, a friendly. Beckham, like Woods, transcends his sport to personalize it with everyday folk like you and me. We have to watch to see what all the fuss is about, we are intrigued-and American media...enormous compared to the English media...will do its level best to give him to us in multi-media splendor.

Beckham will be bigger than life in America as a fantastic role model..rivaling Tiger, but will also challenge Tiger's crown as the most marketable sports figure in America. Here's why:

Kids love soccer. I realized this when I signed my 4-year old up to play last Fall at the YMCA. I came with his little ball, and little cleats fully expecting to find a handful of kids wandering around picking daisies off the fields.

I was amazed with what I saw.

Of a field of 8 sectioned off "little" soccer areas, 8 kids per team...2 teams per field, for a total of 128 kids-all excited about the game of soccer.

And that was just the 9am gametime. This went on all that day 'till 6pm.

I've never seen that kind of childhood interest on a golf course.

PS: Thanks to my friends at Hill&Nowlton/HSBC for sharing this survey for all MyDailySlice fans.
Posted by MyDailySlice

I think the problem with professional soccer is that you go because your kids absolutely love youth soccer and they want to see a professional match. Not too many adults seem to go on their own. The crowd usually looks like a pee wee soccer convention. The parking lot looks like a minivan dealership. Maybe the current generation of 8 year olds will appreciate the professional sport for life and it will thrive.

The women's professional league that folded a couple of years ago was all girls youth soccer teams in the crowd.

US Soccer has a long way to go before any player can even park Tiger Wood's car on US Soil. Beckham is the exception because he is more celebrity than athlete to us. Hi welcome to LA party was mostly actors and very few athletes. I wonder if OJ got invited.