A Giant of a man 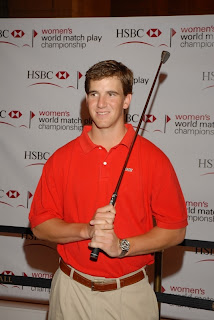 I admit it...I love fantasy football. Last year my team (Nate's Playmakers) practically ran the table until I came up short in the semi's.

Eli Manning was my quarterback.

If ever there was a sports figure so hotly contested for during his senior year at Ole' Miss...he was it. His brother Peyton...his Dad Archie...what a bloodline! Everyone wanted a piece of Eli....and the New York Giants got him.

Last week, as a prelude to the HSBC Women's Match Play Championship, (the tournament featured in a recent post of mine), the storied Grand Central Station in midtown New York was the platform for the week-long HSBC Golf Experience.
Wednesday, they had a putting contest where Eli went heads-up with commuters. Throughout the week, New Yorkers tested their skills for the opportunity to compete against the NFL quarterback in a friendly putting competition.

In the end it was all for a good cause, and as a result, Manning's charity...St. Vincent Hospital, was the beneficiary of $5,000 courtesy of sponsors HSBC.

I'm happy for the donation for a good cause-and-all. But I'm wondering what Eli was doing taking time away from football practice?...I mean...he needs to FOCUS! We're almost into the season.

...did I mention I take this fantasy football seriously?

I am thinking Eli is set to have a big year, so go get him for your team this year. And if you love Fantasy Football, check out my blog at http://tjifantasysports.blogspot.com , I think you'll like it.