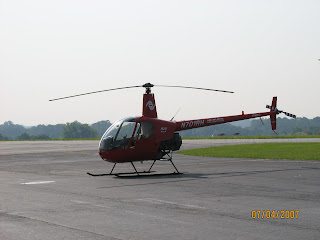 That's right, for my Fathers' day gift, my wife (being of sound mind and body), gave me a certificate for a 1/2 hour helicopter ride with Air Atlanta Helicopters at the local PDK airport.

Now, I've never been in a helicopter before, so I had trepidation at first...

...but then I thought of all the MyDailySlice readers who would love to see an aerial view of a famous golf course here in Atlanta! So I donned my headphones and strapped into the copter provided by Air Atlanta Helicopters , and I was off to...
East Lake Country Club 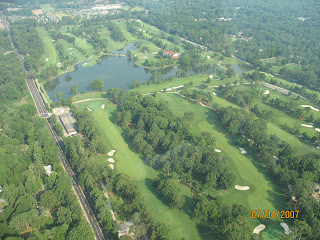 Yep, home of The Tour Championship. This year being of extra importance for the golf tournament as it is the culmination of the FedExCup. It will be held here Sept 10-16th.
Some interesting notes about this course. In 1925 Bobby Jones beat Watts Gunn at the US Amateur Championship at Oakmont. Both Jones and Gunn were members of East Lake during their historic meeting. Marking the only time in history that 2 members from the same club played in the finals of The Amateur.
Okay...I know what you're saying..."that's cool, but...a fly-over video would put this post over the top!"
How's this:

If you're coming to Atlanta and want to do something very cool, rent a helicopter...buzz over the course as well as downtown, and then schedule a tour of East Lake...they have tours on the 3rd Sunday of every month at 3pm.
Tell 'em MyDailySlice sent ya.

Thanks for reading. Keep it in the short-grass,
JFB