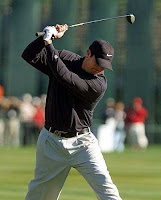 The Wall Street Journal had an eye-opening story this week on how improved (read: meaner)sports teams' logos have changed the fortunes of these teams.
For example, one the paper mentioned was the old football logo of the Phoenix Cardinals was one of tepidness...now it has the look of a pissed off Cardinal that lost the last worm in the morning to a Robin. Once perennial doormats, they now will play in the Superbowl against the Pittsburgh Steelers.

The story features other football teams (Buccaneers, Patriots etc) that have changed their logo's and have ridden the meaner-looking trend to climb out of the cellar.

So I got to thinking about the PGA Tour logo. Long revered as having been modeled after the sweet swing of Jerry Pate, the current logo is a docile and stale. When I think of that pose, I don't think 'great pose', I think about the plaid pants the man wore.
What's needed is edge...like the edge Pat Perez gave to the hallowed turf in 2002 at Pebble Beach...what that backhanded swing exemplified is passion...it's not so much of an out-of-control golfer, than an in-the-moment athlete that pushed the envelope...and it pushed back.

I think having the shadow of Pat Perez's fateful backhand is exactly the new image the PGA Tour needs for their logo. It's time to get mean, show that the Tour is a hard-fought battle and that the tough, aggressive, and passionate win the battle.

Make the audience feel that divot...

Thanks for reading. Keep it in the short-grass,