The deal comes with fuel for life 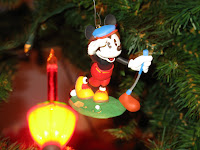 This past weekend, Tiger Woods announced his intent to design and build his inaugural golf course in...drumroll please...

Dubai of the UAE. The property will be part a mega-development called DubaiLand.

Not China, which I had speculated in a previous post .

So, being that this is the Christmas season, I want to celebrate Tiger's accomplishment with an original Christmas diddy.
All apologies to Dick Smith & Felix Bernard, whom wrote the marvelous song "Winter Wonderland" in 1934.
Maestro?...
...okay...a one.. and a two...

Tiger's speaking, are you listening,
from his plane, oil wells are glistening
"It's a beautiful sight,
I'm happy tonight,
I'm building a golf course in sandy DubaiLand."

"Gone away are the pine trees,
here to stay are the refineries."
He sings a love song,
as we fly along,
he's building a golf course in sandy DubaiLand.

"In the desert we can build an exclusive golf course,
then pretend it was built for all mankind.
They'll say: can we play for Fifty?
we'll say: no man.
But you can clean my clubs
when you're in town."

Later on, of his big plans, we'll get a glance,
as we dream by a belly dance.
To face unafraid,
the plans that he's made,
google-eyed over a sandy DubaiLand.

"On the property we will build a statue for King Finchem,
and pretend that he's a circus clown.
We'll have lot's of fun with Mister Finchem,
until the other golfers knock him down."

"When the course opens, won't it be thrilling,
you'll pay through the nose as I'm chilling.
I'll spearfish and play, the Thai/American way,
walking in a sandy DubaiLand."

Thanks for reading. Keep it in the short-grass,